A member of the Young Liberals of Canada’s national executive could be in hot water following a series of tweets about the Roma people.

Dunja Stajic is a long-time Liberal activist and vice-president, communications on the national executive of the Young Liberals of Canada. According to her LinkedIn profile, she is also the front office receptionist at Liberal premier Wade MacLauchlan’s office in Charlottetown, Prince Edward Island.

The trouble for Stajic began around eight in the morning on July 2, when she sent five tweets in just under 10 minutes.

The tweets, one of which has since been deleted, begin with a link to a news report that suggests improved integration of the Roma people will be essential to Serbia’s bid to gain membership in the European Union. Stajic argued that Roma people shouldn’t be protected and “given benefits while Serbs can’t afford to feed themselves.”

Editors' note: After publication, Ms. Stajic set her twitter account to private, disrupting the embedded tweets we had below. We've now inserted a screen capture of the messages. 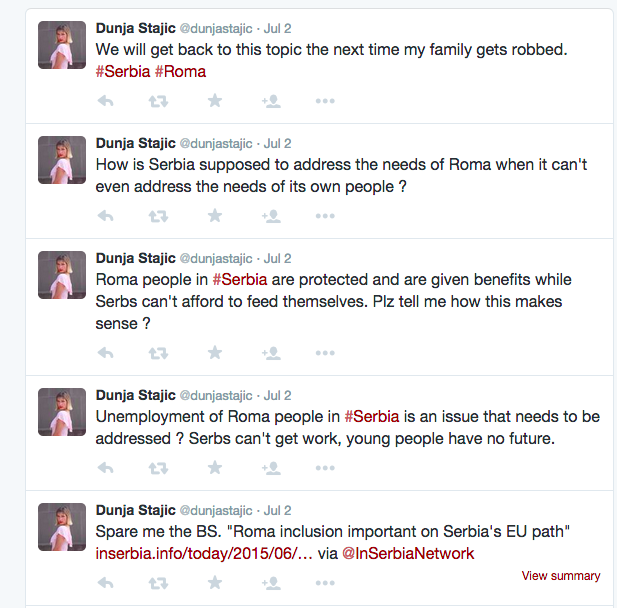 Ricochet spoke to Stajic by phone on Saturday, and after our interview she deleted the final tweet she had sent, regarding her family being robbed. Stajic confirmed sending the tweets, but argued her intent was not to offend anyone.

“I’m not going to make excuses. I did publish those tweets, and they’re public and obviously they were brought to your attention so somebody has seen them. I am responsible for those tweets, and I will honour those tweets [by not deleting them] but I don’t want people to think I’m being defamatory, because that’s not my intention. It was related to the article, and obviously needs context to understand and not be viewed as defamatory.”

“In order to integrate a minority group, you can’t just give them money and leave them alone,” explained Stajic. “This article says that in order for Serbia to make headway in succession negotiations [to join the EU] it has to solve this problem, but there are so many problems that have to be solved before the Roma people’s issues need to be addressed. I’m just putting other things first, because in order for that to happen [helping the Roma integrate], other things have to happen first.”

Stajic asked how Serbia is expected to accomplish the goal of integrating the Roma. “Are they going to give them more money? Is that going to help? No. There are so many ways that you can help them that is not giving them these benefits.”

“It’s so difficult to clarify this without making it seem as if I’m discriminating against the Roma people.”

A vulnerable and oppressed minority

There are around 150,000 Roma in Serbia, according to a paper entitled “Roma in Serbia: discrimination and integration of a minority group.” The paper, authored by Ivana Milenovic from the non-governmental organization Differentia, describes the Roma as a “highly deprived social group,” with many having lived in makeshift camps for decades. Basic public services including sewage and garbage removal are often not available to them, and Roma face severe poverty and pervasive discrimination from non-Roma.

Racially motivated attacks on Roma are common. Even the police regard Roma as criminals and routinely mistreat them, according to Milenovic. Unemployment among Roma is at almost 70 per cent, and the racial stereotype of Roma as thieves is fed by a society that leaves them with few other means to survive. The Serbian government passed a law in 2002 committing to better integrate Roma into society, but there has been little concrete progress since then.

In 2013 the Canadian government mounted a crackdown on Roma refugees from Hungary, deporting claimants deemed to be from a “safe” country in Europe. Refugee advocates argued at the time that Roma face poverty, stigmatization and intimidation from extremist groups in their home countries.

Justin Kaiser, president of the Young Liberals, told Ricochet that Stajic wasn’t speaking for them with her tweets.

“That account is her personal account, in no way is it an official account for the Young Liberals. About the tweets, I spoke to her this morning, and she’s been quite apologetic. She was trying to highlight the economic and social problems in Serbia .… Unfortunately it was poorly worded and came across in that unfortunate tone.”

Asked if she would still send those tweets if she could do it over, Stajic replied, “I would have probably reworded them, worded them a little differently, given more clarity and provided a little more factual background information for people to understand what I was trying to say. But you know, you only have so many characters.”