In the face of opposition by local Innu and Inuit people, Nalcor Energy’s hydroelectric development in Labrador continues unimpeded.

Located on the lower Churchill River, the $8.6-billion project has started with construction of a dam at Muskrat Falls, which will flood the river valley. Both the falls and valley have historic, cultural and spiritual significance for the Innu and Inuit peoples. 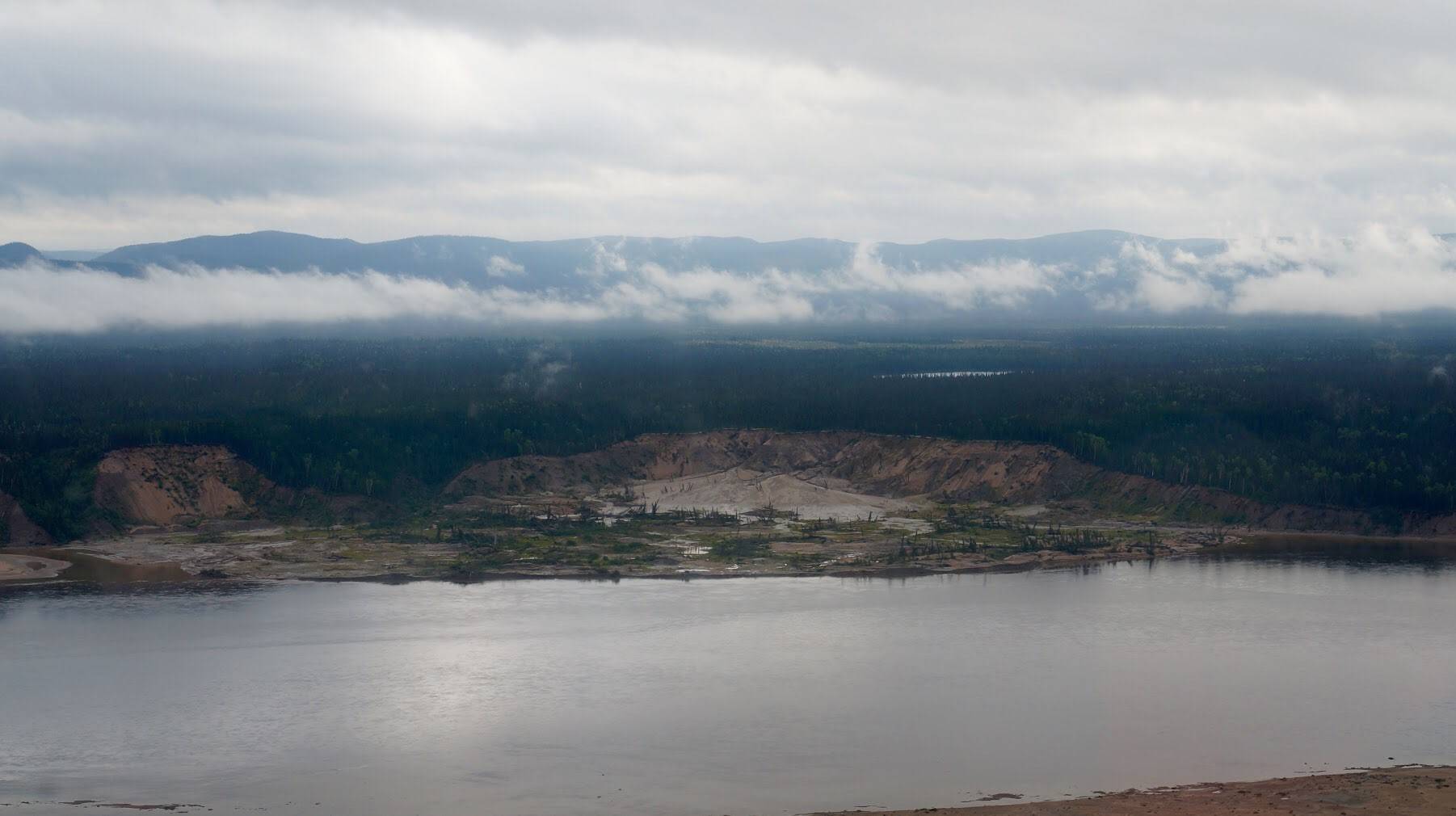 Indigenous people have come to this section of the Churchill River, located directly above Muskrat Falls, for thousands of years. Archeological evidence shows it was a common resting spot. When the dam goes online, this area will be flooded.
Ossie Michelin

The Lower Churchill hydroelectric project will be accompanied by an 1,100-km power line corridor crossing from Labrador to Newfoundland. It will cut through the unceded territory of the NunatuKavut Inuit, the only group of Inuit in Canada with an outstanding land claim.

Residents are also concerned about the destruction of hundreds of kilometres of forest and contamination of fish and seal stocks with methyl mercury.

The hydroelectric facility at Muskrat Falls is slated to begin operation in 2017 with an expected power generation of more than 800 megawatts. An underwater cable will carry electricity to Nova Scotia via Newfoundland.

Over the month of August 2015, I documented opposition to the project in a series of photos of the Churchill River, also known to locals as the Grand River (Inuit) or Mistashipu River (Innu). 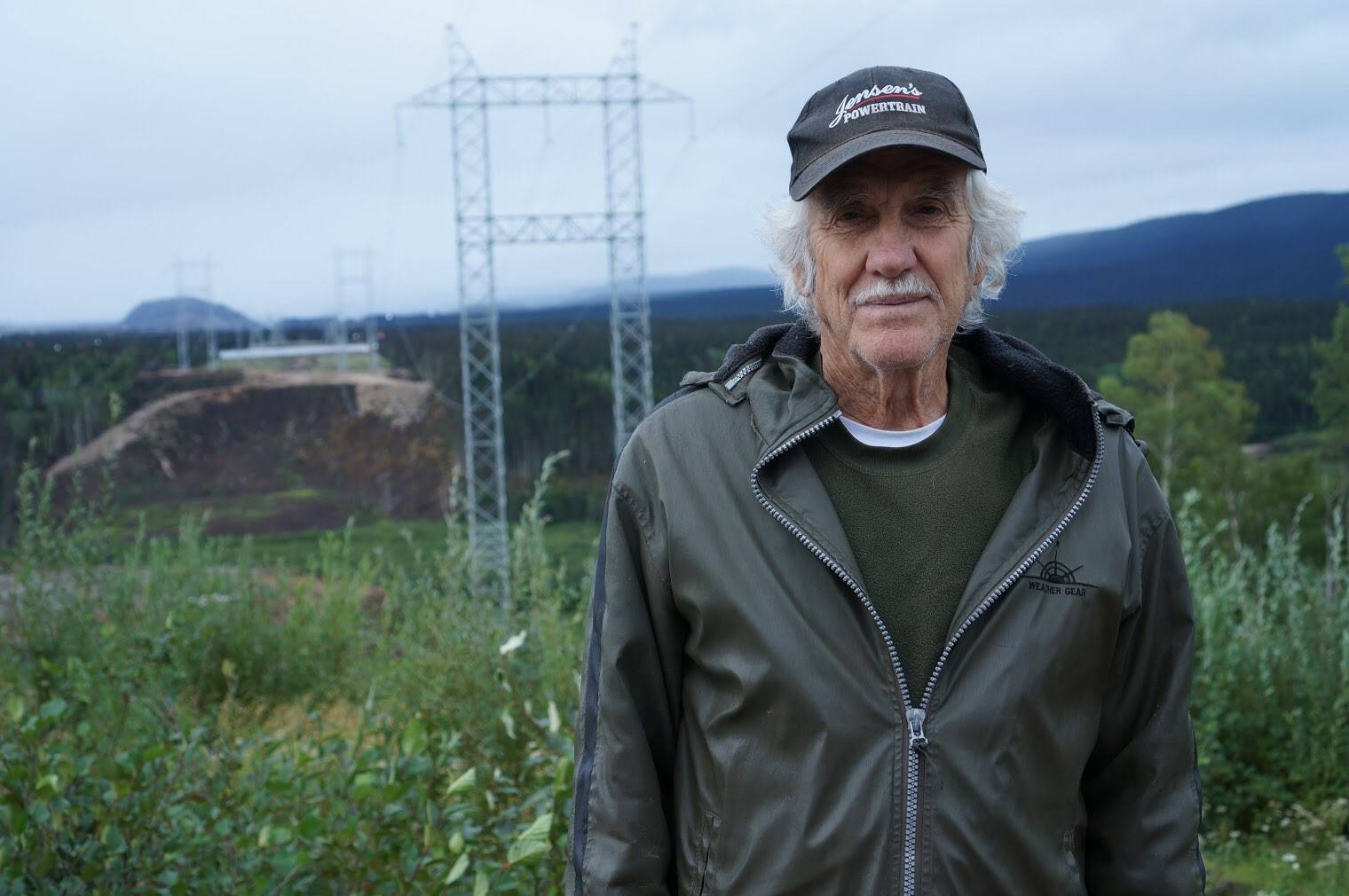 Explaining he couldn't live with himself if he didn't put up a fight, Jim Learning, a 77-year-old NunatuKavut Elder, says so far he's been to at least four protests and spent a week in jail.
Ossie Michelin

“It was a done deal from the get-go,” said Jim Learning, 71, a NunatuKavut Elder. “I knew the people here wouldn’t rise up to try to stop this thing because it offers a few local jobs, but I couldn’t live with myself if I didn’t try.”

Learning has been to several protests against the development. Despite an injunction that forbade anyone involved with the NunatuKavut Community Council from coming near the project site, he occasionally came to bear witness to the “destruction.” He spent a week in jail for violating the court order, which was later thrown out in the Newfoundland and Labrador Court of Appeal. 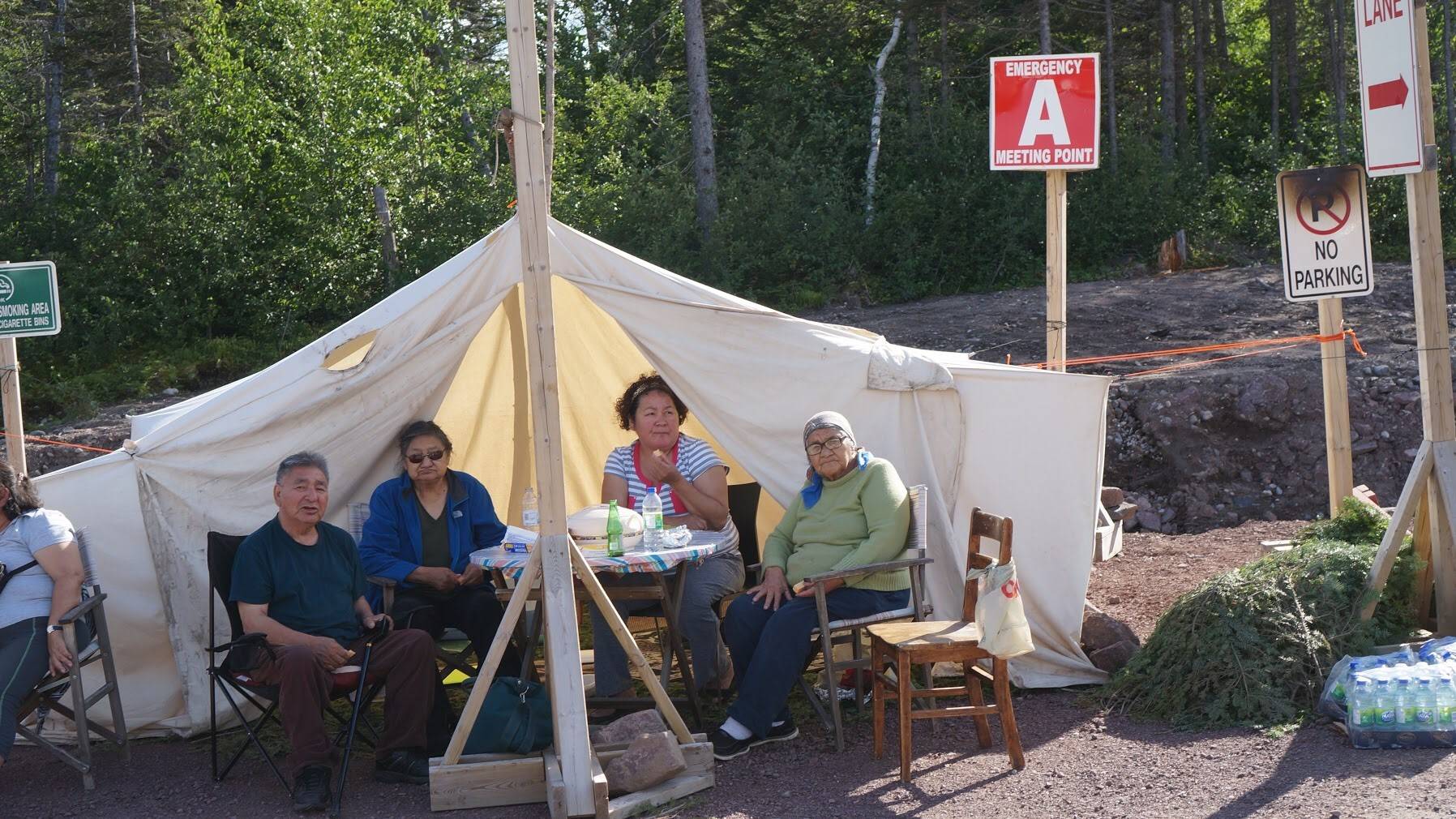 Innu protestors at the Lower Churchill project sit in a traditional Innu canvas tent. Most of the time this parking lot is full of dump trucks and heavy equipment working on the site.
Ossie Michelin

After a non-Indigenous worker assaulted an Innu one, Innu protestors blocked the entrance ways to the project site, shutting down construction.

The protest grew into a larger claim that Nalcor Energy was not honouring its commitments as outlined in an Impact and Benefits Agreement with the Innu, which includes a commitment to hiring. Of Labrador’s Indigenous groups, only the Innu have such an agreement. 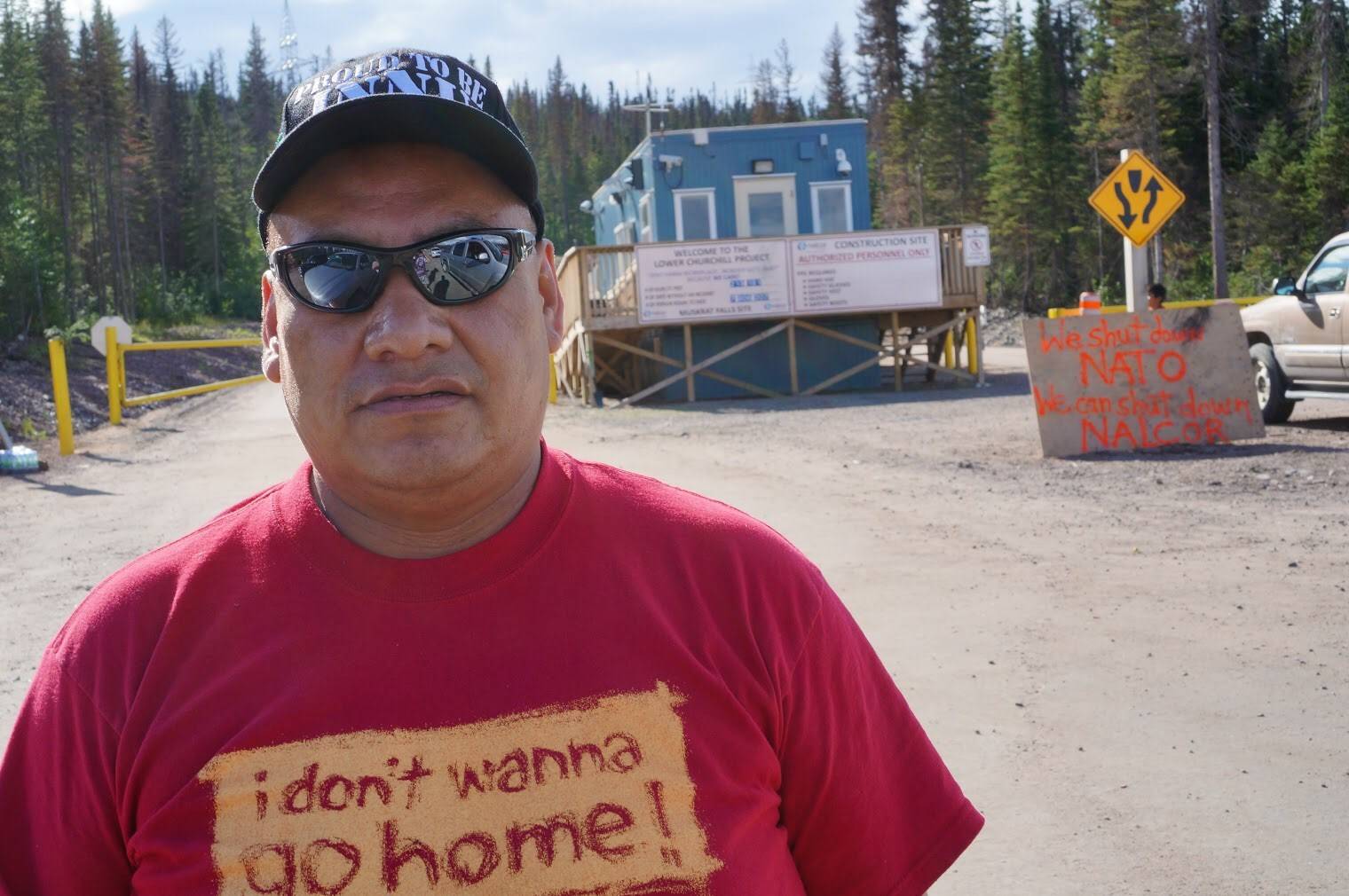 Simeon Tshakapesh, deputy chief of the Labrador Innu Nation, barricaded the entrance to the Lower Churchill project along with other Innu protestors. They say Innu workers at the site are subject to racism.
Ossie Michelin

“I never wanted this project in the beginning. A lot of people didn’t want it,” said Simeon Tshakapesh, who became deputy chief of the Innu Nation in Labrador a year ago.

“But we got it, and now they have to honour our IBA. They have to treat the Innu people right.”

Tshakapesh said he’s heard many stories of racism against Innu workers at the dam construction site, including physical assault. 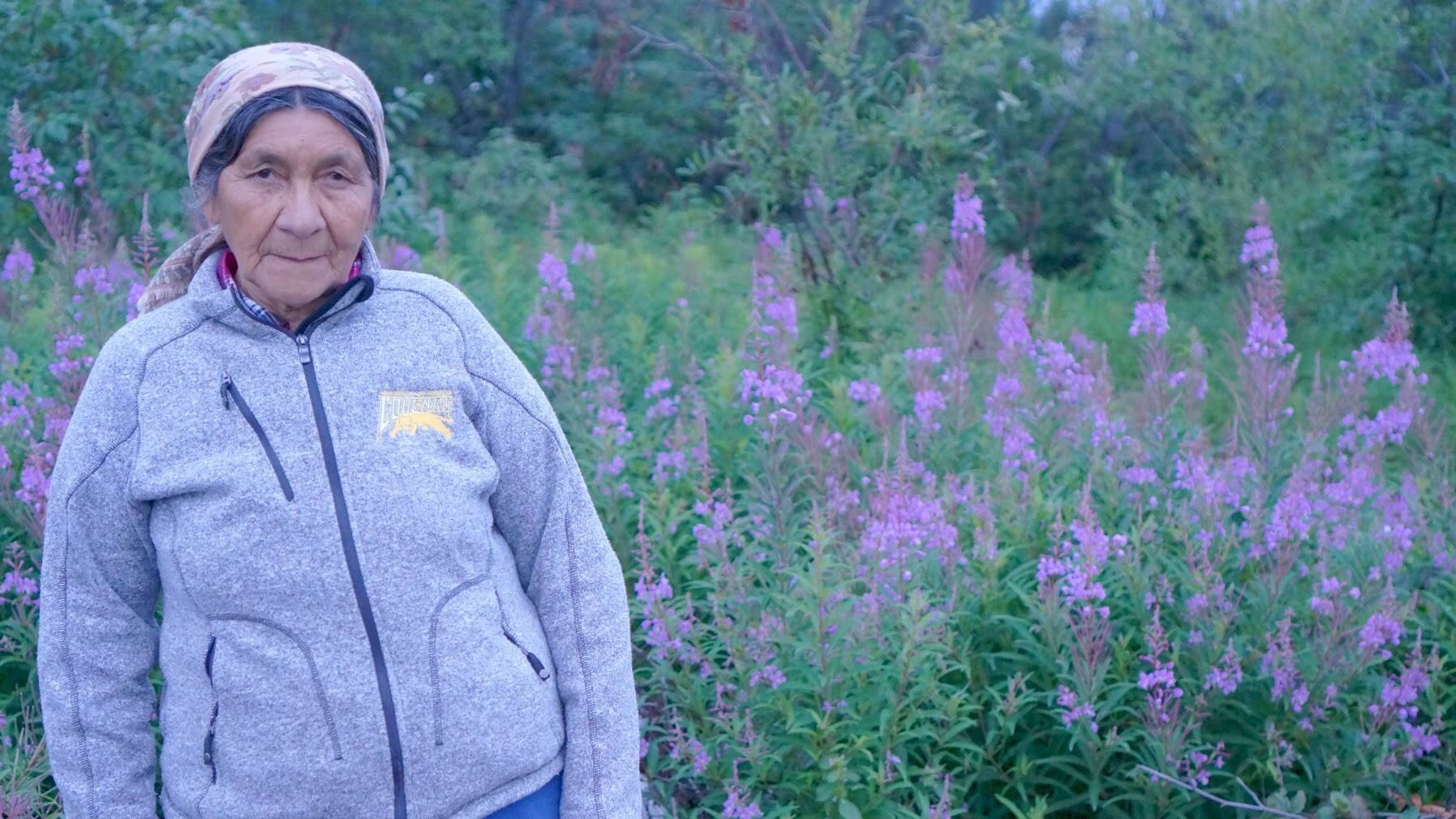 Innu Elder Elizabeth Penashue wants to protect the environment for her children and grandchildren.
Ossie Michelin

For more than a decade, Elizabeth Penashue has taken groups of Innu and allies on traditional canoe trips down the river. At 71 years old, the Innu Elder said, this could be her last trip. But she yearns to go again, and said the idea of losing the land has left her heartbroken.

“When I go in my canoe on the river, it is very beautiful, lots of plants and animals. And I get sad because I know all the plants and animals are going to die,” said Penashue, her eyes becoming glossy. “They’re not all going to run away when they flood the dam. That makes me very sad.”