The system is the problem

Capitalism vs. the climate in the streets of New York

The iconic skyline was shrouded in fog as we struggled to exit the subway on Sunday morning in New York. Standing at the head of the stairs a blue shirt called for our cooperation, his plaintive tone infused with the sort of accent that movies lead us to expect from NYPD beat cops.

“I need your help here, folks. They’ve closed all the stations up to here, so everyone is going to be coming out this exit. I need you all to help me out and keep moving.”

We moved, but the crush did not abate once we got away from the subway entrance. In every direction all we could see were people, spilling into side streets, stacked too close for comfort and clothed in the signs and slogans of a climate movement finally coming of age.

“Politically I’m thrilled with this crowd,” remarked a US journalist. “But personally there are just way too many people.”

Schooled in the art of ducking and weaving through crowds of protesters on the streets of Montreal, my colleagues from the French edition of Ricochet led us on a frenetic chase, trying to move up from somewhere in the middle to the front of the sprawling march. We never made it.

This was a crowd that rivalled the very largest we had seen during the six-month-long Quebec student strike of 2012.

One thing was clear to us all: this was a crowd that rivalled the very largest we had seen during the six-month-long Quebec student strike of 2012. A professional crowd estimate released by organizers, based on data from 35 crowd spotters analyzed by a mathematician from Carnegie Mellon University, judged the crowd at roughly 311,000. Some media outlets, including Time and Rolling Stone, thought it topped 400,000. For once, media coverage was near unanimous in estimating turnout.

Organized by a coalition of environmental groups including 350.org and Avaaz, the march in New York was the centrepiece of a global day of action that saw tens of thousands march in cities from London to Melbourne, with smaller numbers joining solidarity marches in cities across Canada. 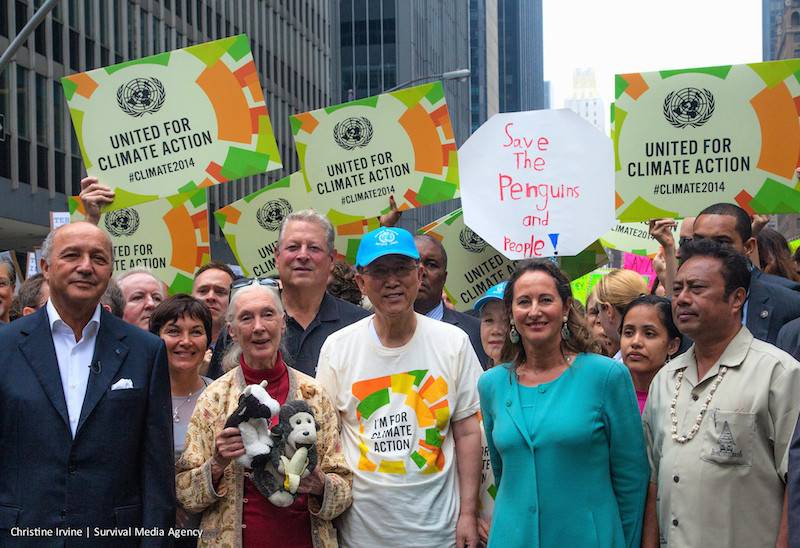 The protest was timed to apply pressure in advance of the first UN summit on climate change to include world leaders since the ill-fated Copenhagen talks in 2009. It included Al Gore, New York mayor Bill de Blasio, UN Secretary General Ban Ki-moon, conservationist Jane Goodall, Hollywood stars such as Leonardo DiCaprio and Joseph Gordon-Levitt, and musicians including Sting and Peter Gabriel.

It was followed up on Monday by a direct action billed as Flood Wall Street, in which hundreds chose to risk arrest by wearing blue and swarming the heart of global capitalism on the eve of Tuesday’s start to the summit in New York. Over 100 people were arrested during the action, meant to draw attention to the role of Wall Street in causing and compounding climate change.

Over the days leading up to the march in New York, I asked many organizers and journalists what to expect. The most frequent, and most honest, answer I got was that no one had any idea. There was near universal agreement that anything over 100,000 people in attendance would be a resounding success. I got the sense that this was a great experiment, one that would go a long way towards shaping the future of this movement, and had many of the organizers holding their breath.

I got the sense that this was a great experiment, one that would go a long way towards shaping the future of this movement, and one that had many of the organizers holding their breath.

I caught up with Cam Fenton on the balcony of a sprawling four-story building in Bushwick dubbed simply the “art-build space.” A secondary space a block over was designated for larger projects, and both hummed with constant activity throughout the days and nights leading up to the march.

Fenton is a key organizer behind Powershift, a former national director of the Canadian Youth Climate Coalition, and now a Vancouver-based organizer with 350.org. He’s the archetype of a new generation of activists for whom the issue has always been the climate. On this day he was spray painting a pair of papier-mâché hulk hands, meant to twist apart a pipeline.

“This is unlike anything that has gone before,” he told me between bursts of green paint. “Nothing has felt as diverse, bringing together different actors to treat climate as a social issue and take it out of the environmental silo. I think what we’re going to see on the streets on Sunday is the new face of the climate movement.”

On the other side of the balcony a gang of Brooklyn high schoolers were painting a banner of their own. “I’m here to learn about this issue,” said grade 12 student Manisha Das. “I hope that by learning about it, I can help to make the world better somehow.” 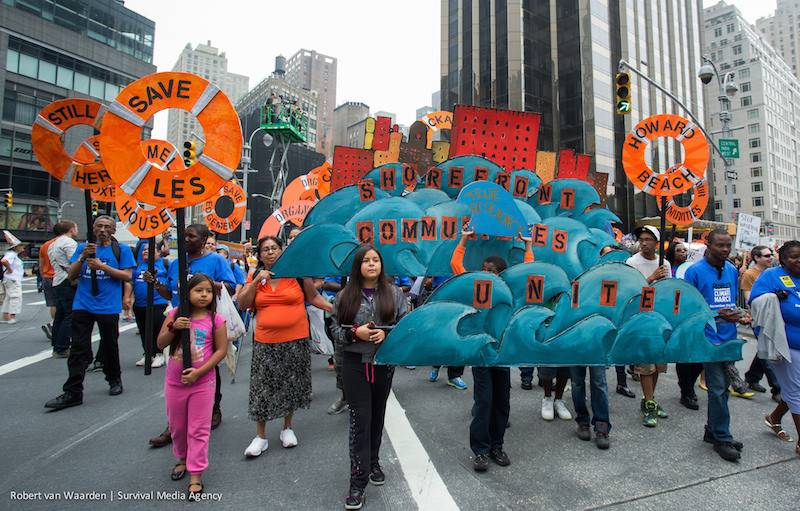 Released last week, Naomi Klein’s new book This Changes Everything: Capitalism vs. the Climate seeks to help people like Manisha learn about the issue and spur them to action. It has already become an audacious rallying cry for this rapidly growing movement. Everywhere I went in New York, Klein’s framing of the issue was as universally known as it was accepted.

Back in Montreal on Monday, on air at the talk radio station where I serve as token leftie-in-residence, a colleague repeated the canard that the climate movement is driven by a desire to replace capitalism with socialism, rather than by the scientific consensus of over 97 per cent of climate scientists.

An economic system predicated on infinite growth cannot be sustained on a planet with limited resources and limited capacity to withstand their exploitation.

He’s half right but it’s actually much simpler than that, and has nothing to do with socialism. The message of Klein’s book is that unfettered capitalism is inconsistent with the survival of our planet. An economic system predicated on infinite growth cannot be sustained on a planet with limited resources and limited capacity to withstand their exploitation.

It’s a simple argument, based on logic so irrefutable that a grade schooler could understand it — and many do. It’s also an argument I found pervasively and indelibly etched in the DNA of this weekend's actions. 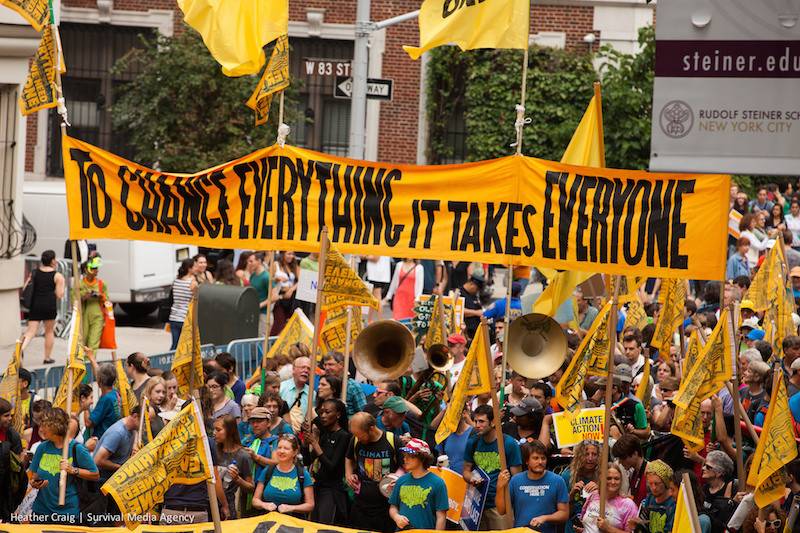 Despite Climate Week's questionable corporate sponsors, including Lockheed Martin, BMW, IKEA and the World Bank, the ethos of most people I met in New York was reflected in the most common slogan used to advertise the march: “To change everything, we need everyone.”

And changing everything is just what many of those marching had on their minds. One of the most oft-repeated slogans, scrawled across more hand-painted signs than I could count, was “capitalism vs. the climate.”

From the Hurricane Sandy-ravaged housing projects of Far Rockaway to the concrete jungle of the South Bronx, the people I met may not know what the future looks like, but they know the logic of capitalism is killing the planet, as surely as it is killing their communities.

“We need to treat our planet differently in order for human existence to continue,” summed up Mychal Johnson, a community organizer in the South Bronx and civil society delegate to this week’s UN climate conference. “But we need this fight towards sustainability to come from the community, from human beings, not corporations.”

Back in Manhattan I bumped into a group of students who drove the almost dozen hours from Greensboro, North Carolina. I asked them why they made the trip.

In the streets of Quebec in 2012, I often watched crowds of thousands gleefully take up the chant of “a, anti, anti-capitalista!” I thought at the time it was indicative of how different Quebec could be, but perhaps it was merely the vanguard of a growing movement. 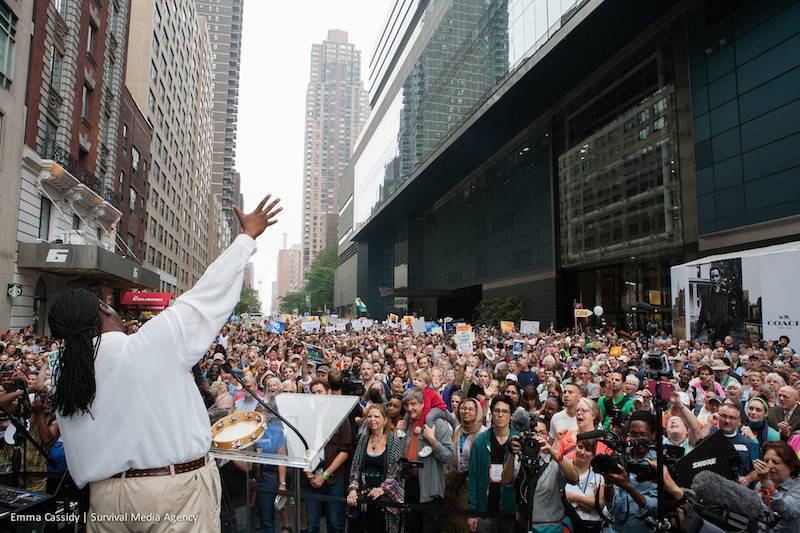 Far more significant than the numbers that took to the streets of New York and cities around the world was the message they carried. Increasingly the climate movement is coalescing around an analysis that places the blame squarely on the capitalist system and sees its replacement as necessary to human survival.

Increasingly the climate movement is coalescing around an analysis that places the blame squarely on the capitalist system and sees its replacement as necessary to human survival.

As Klein argues: “Climate change detonates the ideological scaffolding on which contemporary conservatism rests. A belief system that vilifies collective action and declares war on all corporate regulation and all things public simply cannot be reconciled with a problem that demands collective action on an unprecedented scale and a dramatic reining in of the market forces that are largely responsible for creating and deepening the crisis.”

The environmental movement I saw in New York appeared resurgent, intersectional, and suddenly sure of itself in the face of the tremendous task ahead. And it is a tremendous task.

“In the face of an absolutely unprecedented emergency, society has no choice but to take dramatic action to avert a collapse of civilization. Either we will change our ways and build an entirely new kind of global society, or they will be changed for us.” 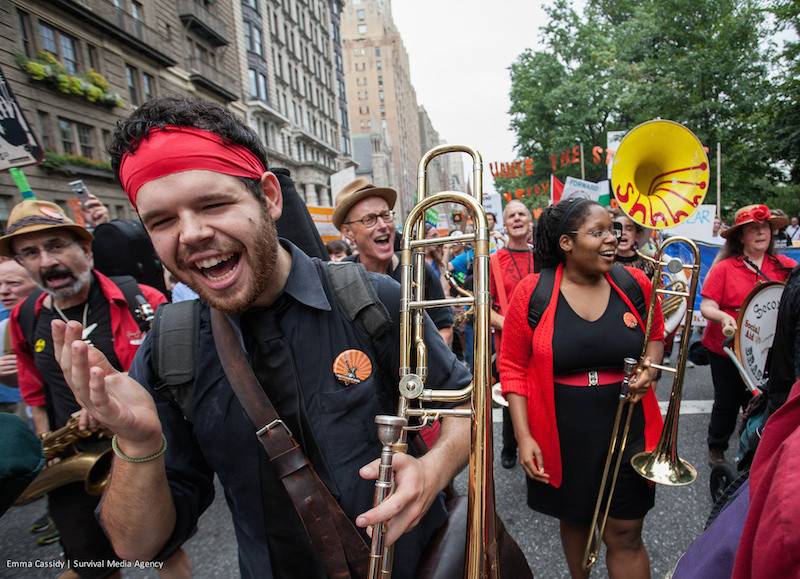