Mega manif in Montreal: The giant protest you never heard about

Under a large, bright orange banner reading, “With Us, It’s Public,” more than 150,000 people marched on Oct. 3 to support public services and call for improvement of conditions for workers in the public sector.

Your ad here
Automated ads help us pay our journalists, servers, and team. Support us by becoming a member today to hide all automated ads:
Become a member
Share this
0 Comments
Share this
0 Comments
Editors’ note: On Saturday, Oct. 3, an estimated 150,000 people marched in Montreal in support of public services and unionized workers. This anti-austerity demonstration received little coverage in the rest of Canada. We’ve translated a report on the march from the French edition of Ricochet.

The Common Front brings together the Secrétariat intersyndical des services publics (SISP), roughly translated as the Inter-Union Office for Public Service Workers; the Confédération des Syndicats Nationaux (CSN), translated as the Confederation of National Unions; and the Fédération des travailleurs et travailleuses du Québec (FTQ), rendered as the Quebec Federation of Labour. This coalition of labour federations formed by the SISP, CSN, and FTQ invited its members and Quebec’s wider population to Mount-Royal Park this past Saturday in an effort to put pressure on the Quebec government.

Currently in collective bargaining negotiations with Philippe Couillard’s Liberal government, and litigating on the issues of salary tenders and pension plans, the Common Front’s call is unequivocal: negotiate, or we’ll go on strike in the next weeks. Carole Dubé, spokesperson for SISP, confirmed that “huge participation in this march reflects what we see in our meetings: a high turnout for strike votes.” She hopes that the minister will hear this call to action from the streets and that it will be taken into account at the negotiating table.

Onstage at the endpoint of the march, however, the spokesperson and president of the FTQ was more militant. “We’re seriously negotiating, or we’re striking. Our mandate is not small, with assemblies that voted at 80 per cent, 90 per cent, and 95 per cent in favour of a strike,” chanted Daniel Boyer.

He called on all members of the Common Front across the province to increase pressure this week by organizing activities that disrupt the economy. “We don’t want to go on strike, Mr. Coiteux [Eds. Martin Coiteux is Minister responsible for Government Administration and chair of the Treasury Board.] We want to negotiate. We don’t want to mess around, but actions speak louder than words and if action doesn’t happen, then our mobilization will match the heights of your arrogance.”

“This is of one of the largest manifestations in the history of common fronts in Quebec,” confirmed the president of the CSN, Jacques Letourneau. “Mr. Couillard, if you don’t listen to the message these Common Front and public service workers are sending, this will be just the beginning, and we will keep up the fight!” cried Letourneau to the crowd in front of a stage built for the event.

The workers, accompanied by their families and coming from all over Quebec, have responded to the unions’ call in a pacifist and festive spirit. Signs read “Couillard is a drag for Quebec,” “Couillard, will you bend over for a SPANKING?” “M. Couillard, are there teachers in your family?” “You can’t count what matters,” and “With us, to make our future.”

“I’m happy to be here. It’s important for the government to hear about what we’re doing. It’s important that we offer good services to the population. But for that to happen, our work must be respected. And if we have to strike, we’ll do it. We’re ready,” explained Louise, a nurse at one of the city’s hospitals.

A contingent of students from the Association pour une solidarité syndicale étudiante (ASSÉ), or the Association for Student Union Solidarity, joined the march. Their presence was felt as they unfurled a large banner. [Eds. The ASSÉ is Quebec’s largest student federation.]

“For us, it’s not a strike about expenses, it’s a strike about revenue. We want to support workers in the public sector, as part of the global struggle against austerity,” explained Hindi Fazazi, spokesperson for the ASSÉ.

The Oct. 3 march is part of the ASSÉ autumn action plan, also organized to put pressure on the government, specifically in the education sector. “We’re holding our congress at the end of the month to determine the specifics of the strike, but right now we’re calling for general mobilization, particularly by the unions in the education sector.” 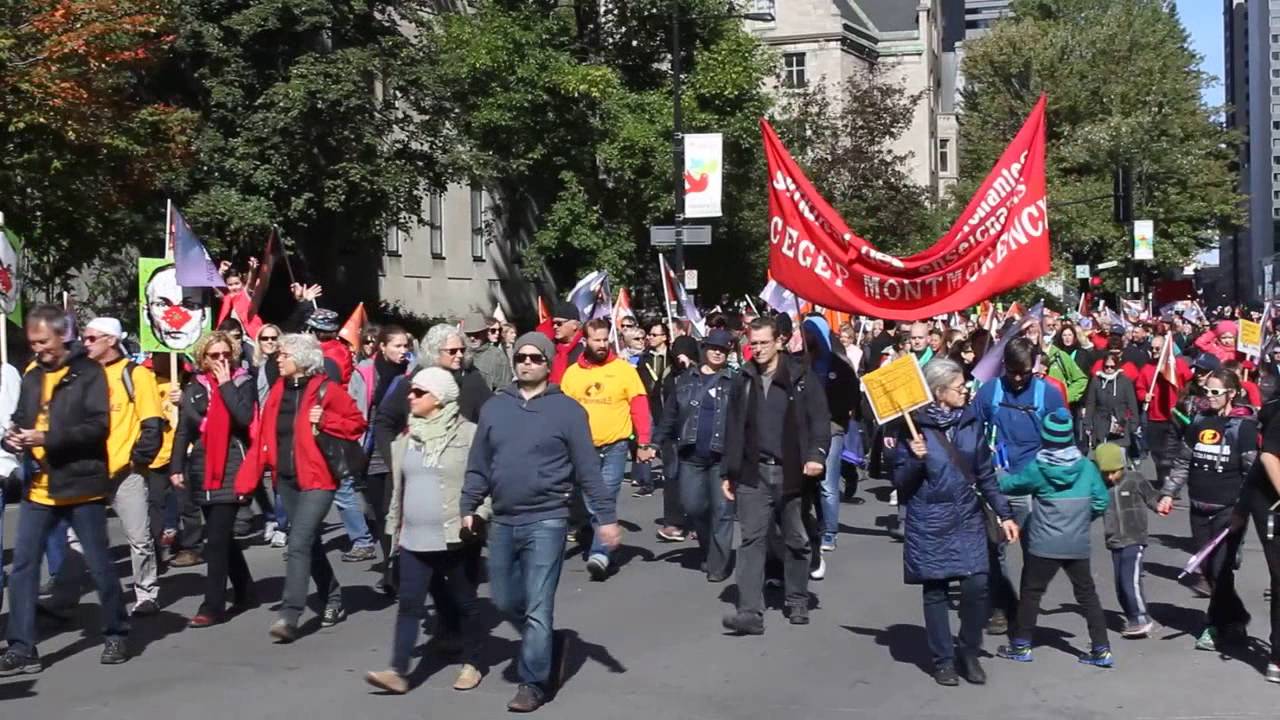 Following a musical performance by the Porpour band and speeches by spokespersons, the protest ended with a show by singer Yann Perreau.

If negotiations don’t succeed, a strike will happen, with the majority of strike mandates voted on by the unions consisting of six days of rotating strikes. The Common Front represents 400,000 workers in the health and social services, education, higher education, and civil services sectors in Quebec.